Do you know what the concept of townhouses is? You can still be part of the modern complex with townhouses in Plovdiv.

Various sources say that townhouses first appeared in England and France, and their widespread distribution began in the 19th century. Today, they are being built in many countries, including the Scandinavian countries, Russia, Britain, the United States, and even countries in Africa.

This new concept for Bulgaria has actually been known to the world for a long time. A townhouse is a house, part of a large group, united in a closed residential complex. They often share a common outer wall. Each of the townhouses in the complex has an individual roof, not a shared one. The individual roof makes the houses separate and independent. The houses are modern and have the same-looking facade, however, each of them has its own entrance, garden, and parking space.

What is the difference between a townhouse and an apartment?

Townhouses usually consist of several floors and have their own roof and exterior door. The apartments have only one level and access via a common staircase through a common corridor. In most parts of the United States, an apartment also refers to rental housing, while townhouses are mostly individually owned.

The advantages of townhouses are a lot

The security they provide is incomparable. The closed complex has controlled access and round-the-clock video surveillance. This guarantees additional peace of mind for the moments when the home remains uninhabited. Another great advantage is the community that is created, while at the same time, everyone has their own personal space and property.

This surpasses the  ​​living-in-an-apartment idea and gives birth to a new dream – to take advantage of the city while living next to the mountain. Markovo Vita Nova’s location provides the dream of peace, tranquility, and fresh air. However, it does not deprive its inhabitants of the benefits of the city because it is very close to it. The combination of these advantages makes townhouses so much more desirable than classic residential buildings and houses.

Townhouses around the world – from historic houses to modern complexes

The story goes that the townhouses used to be the residences of nobles and wealthy families. The owners often used them during the social season, when balls and big events were held. Townhouses in the United Kingdom were originally known as urban residences of the aristocracy. They most often had common outer walls attached to a number of neighboring houses. As a result, it was difficult to distinguish between the modest dwellings and the ordinary blockhouses of the bourgeoisie. After the First World War, many of them became apartment complexes.

In Scandinavia, taxes are calculated according to the width of the facade, so the houses are narrow and high. They are connected by common sidewalls and have very high ceilings and large windows. Usually, a garden stretches behind them. Many mansions and townhouses are located along the canals of Amsterdam.

In the United States and Canada, there are two types of townhouses. The most popular are houses with small built-up areas and many floors. They are within walking distance of the city’s business and industrial areas but are still luxurious enough for wealthy residents.

In Asia, Australia, and South Africa, the use of the term follows the North American meaning. The houses have high security and a number of facilities such as swimming pools and gyms. In densely populated Asian areas, townhouses in private residential complexes are expensive and attract the rich because they are a rare find, and their size is impressive.

Markovo Vita Nova is a closed complex in the village of Markovo, located at the foot of the Rhodopes. It combines the coziness and comfort of actual home and the privilege of living peacefully away from the city noise. It has everything you need to live and will make the dream of living outside the city a reality.

Includes urban amenities that are rare in vilage homes – central sewerage, plumbing, and electricity, while isolating city noise. In addition, the closed complex includes a number of other services and amenities such as video surveillance, controlled access for all pedestrians and cars, numerous parking lots, children’s play areas and playgrounds, a supermarket in the complex, a gardener, and a host available, who will take care of the whole complex.

All these advantages are extremely affordable for buyers – the price of a townhouse is the same as for an apartment, and its advantages are much more. Markovo Vita Nova offers the tranquility of the mountains, but its location a step away from the city makes it so attractive. You can still be part of Plovdiv’s modern complex and replace the apartment with a new townhouse at the same price. 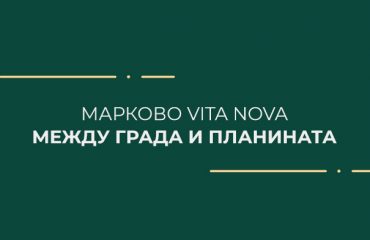 Markovo Vita Nova – Between the city and mountains 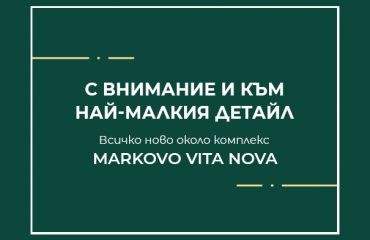 With attention to the smallest detail

We started building a transport connection to the complex